Hair Coloring Horror: Why You Should Always Patch Test

Here is a hard lesson learned on why you should patch test a new product before smearing it on any part of your body. Also, hair chemicals are bad, mmmkay? There are natural hair coloring products out there. But, bottom line is this could happen to anyone with any product, so be careful and act immediately if you start noticing any discomfort, skin change or other reaction. I always keep Benadryl and Hydrocortisone handy, because you never know.

Also, parents this girl is 15. Parental supervision is needed when using any product like this.

Posted by The Paraben Free Princess at 12:54 PM 7 comments:

Mascara Ads Now Coming Clean in the US About Using Falsies?

I am catching up on my November Allure magazine and I spy a pretty picture of Drew Barrymore hawking Cover Girl Mascara. As usual, her lashes are beyond 'just mascara', which has been a HUGE pet peeve of mine for years. Lo and behold, I spy a disclaimer in tiny print that says: Lash inserts used prior to application to add fullness but not length. Knock me over with a feather! I have never understood how cosmetic companies got away with using obviously fake eyelashes in their mascara ads.

I scratched my head for a moment and wondered WHY Cover Girl finally started admitting they use falsies on their models. Then I remembered a post I did a few weeks back about the FTC cracking down on companies that made unsubstantiated claims, including going after their celebrity spokesmodels. The UK has had a similar law in effect for a while and has busted Rimmel and L'oreal in the past.

The ASA (similar to our FTC) laid down the law on adding disclaimers to ads: "We told L’Oreal to include a disclaimer in future ads featuring models wearing false eyelashes, irrespective of whether those lashes were individually inserted to bring lashes to a consistent standard or whether they were a full set of false lashes. We also told them to ensure future ads made clear that the "up to 60%" claim referred to the appearance of the lashes, not to an actual extension in the length of lashes that could be achieved by using the mascara.

We also told L'Oreal to take greater care in future to provide us promptly with accurate information."

I'm going to start checking for the fineprint on ALL the cosmetic ads I run across to see if I can spot some more disclaimers. More fun than hunting for Easter Eggs!
Posted by The Paraben Free Princess at 3:29 PM 4 comments:

Update: Zoya sent me a PM on Twitter saying that my lip glosses were packaged in the old tubes and that the current formulation was safe. Those of you who have been around for a while will remember my last Zoya ingredients run in around the same time last year. I ended up talking to the vice president of the company who assured me my products were safe and promised that they would start posting their ingredients on the website. Well, that never happened. If you purchased the glosses, decide for yourself. Zoya is saying they are Paraben free. I just have an 'off' feeling about this and am tossing mine. I don't need the stress of wondering if my lip gloss is poison or not.


I can't decide on which emotion is stronger right now, but I am going to settle on disgust. A couple days ago, I put up a post about a promotion that Zoya is doing with their lip glosses. I just received mine today and excitedly tore open the package. The colors were beautiful but I was left stunned when I read the ingredients on these. I had bought a combo pack of polish and lip gloss last year and the gloss didn't contain this garbage.

I sincerely apologize if any of my readers took advantage of this deal. Zoya takes pride in not having dangerous chemicals in their nail polish. So, why are they trying to kill us with their lip gloss?

I used to LOVE Paula Begoun, the Cosmetics Cop, back in the day before I educated myself about Parabens and other dangerous chemicals in our products. I completely disagree with her stance on them and that she uses them in the products she now sells on her website. However, she does put out a useful book to what products work and don't work based on ingredients. It's always an interesting read, but I haven't purchased an updated copy in nearly a decade. On her website, Paula is offering the 7th edition for $5 - the 8th edition will be out soon. She also has a $3 flat shipping offer, so you can get the book for $8. I ordered a copy of it yesterday. I wasn't willing to pay $20 for it, but for $8, I'll bite. That's cheaper than I can find it anywhere used.

Don't Go to the Cosmetics Counter Without Me 7th Edition Link
Posted by The Paraben Free Princess at 12:15 PM 4 comments: 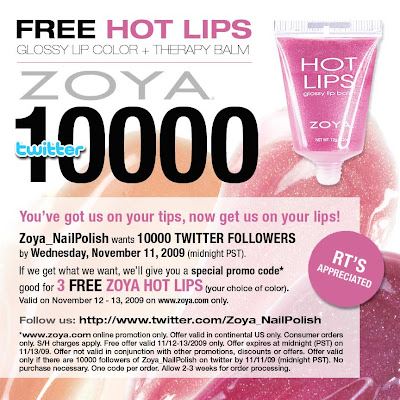 RETRACTION!! I ordered 3 of these and upon receiving them, see the entire ingredients list. They are FULL of Parabens. When I purchased glosses as a set last year, they didn't have all this crap in them. I apologize if I misled anyone with this promotion. Please contact Zoya to return them.


Zoya is trying to drive everyone nuts again. This time, it's their lip gloss giveaway. You still have to pay shipping on these, but it's the cost of one of the glosses. They are nice and thick. I am picking up some for Christmas (ugh). My picks were Blog, Rumour, and Gypsy. Shipping was $6.95 for all 3

Here's some nice color swatches on another blog to help you decide: KarlaSugar

Details: Promotion link from the Zoya blog.
Posted by The Paraben Free Princess at 11:57 AM No comments: